Any manager running a business in which he gets in touch with a mass of documents containing personal information faces the risk of leakage.

Being in charge of people’s sensitive data gets alongside the awareness that these cannot be left around and must be out of reach of anyone else once discarded.

First and foremost because the disclosure, whether it occurs on a voluntary basis or not, of sensitive data and personal information obtained through consent is regulated by specific national and international regulations. These treats concern the processing of personal data and privacy such as for example the GDPR, the General Data Protection Regulation, in strength in the European Union.

The shredder machines of the Kobra line, produced by the Italian company Elcoman and with the best quality of Made in Italy, are a globally acknowledged excellence in the destruction of documents.

Elcoman supplies a complete range of reliable and resistant destructors, for personal use, at industrial level and with automatic feeding and autonomous mechanism.

Spacing from the Kobra of the classic line where you can insert up to 9 sheets at a time up to the amazing Industrial Line designed and developed with the aim of destroying entire archives (up to 500 sheets of paper at a time), floppy-disk, cd, dvd, blu-ray , credit cards, cartons, aluminum cans and plastic bottles. 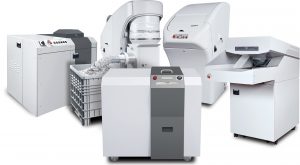 Large shredding throughput? Go for it with the Industrial Line

Simply delete data is not enough to erase them off the planet once and for all. Traces may still be lying on chips and motherboards of the devices where they used to be stored previously.

The Industrial Line comes as an assistant to all those companies requiring to dismiss hard disk devices on a regular basis.

It includes a variety of models, each one with specific structural features ensuring high performance of shredding depending on the material for which it is meant.

Easy access 240×25 mm feed port is designed with safety brush covering the complete opening for safety and ease of feed operation and a  lockable feed hopper once material is fed into the machine.

It generates very low noise levels on a 24 hour continuous duty running while it destroys hardware into tiny 40 mm strip cut with no turning back. 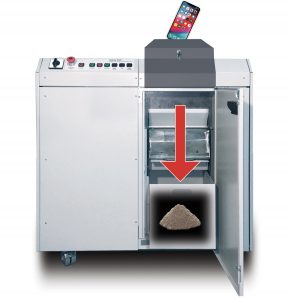 The Industrial Line can be considered as the ultimate development in shredding while the latest technology is deployed for massive destruction demands.

Multi- purpose heavy duty Industrial Line shredder is named after Cyclone, and embodies the destructive might of a natural cyclone by shredding up to 500 sheets at a time regardless of the particle size generating a shredding output up to 420 kg of paper per hour.

Along with the Cyclone an optional Kobra Compactor is designed to compact the ejected paper once it is shredded. When shredding other materials, simply remove the compactor and use standard Cyclone disposal bags.

The Kobra 430 TS is a touch screen Industrial Shredder with Conveyor Belt meant for easily feed the material to shred. The touch screen panel activates the machine functions by simply touching the icons.

Many available models fitting all industrial purposes, just find out which suits your company better.