Since 1985, Elcoman fiercely stands out among the global market leaders in the development and production of documents shredders and data destruction equipments.

Paper shredders, guillotines and trimmers are nowadays distributed in over 90 countries globally under the Kobra brand name and with a far reaching efficient network of agents, distributors and dealers providing customer support, advice and the best assistance.

Since its early days Elcoman stands for assurance, clarity and integrity in its commitment to provide security in the document and data destruction market. An excellence of Made in Italy for over 35 years, Elcoman is always trying to make the best out of its products.

Improving constantly over the years it is now providing companies, governments and private organizations with the efficiency of the latest technologies in the field of shredding.

Indeed the company is firmly committed to consistently provide “something special” in its products, technologies and approach to markets, so to keep up with current times without failing to comply with its high standards of quality.

Let’s jump back to some of the milestones featuring the long lasting successful story of Elcoman. 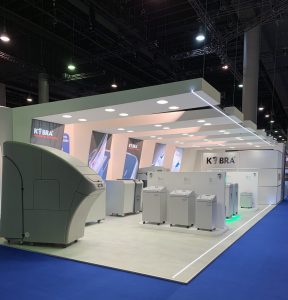 The company took up manufacturing and producing paper shredders in 1985 in Italy, 20 km from Milan, where its Headquarter is now still located.

At the very beginning of its research in the field of shredding, Elcoman pioneered the “electronic eyes” system for auto start and stop. The first shredder line was basically built using metal while any plastic material was limited to few components.

All over the nineties the technology developed the first cross cut technology: beside the development of commercial office shredders, the final goal was to build a High Security product for Government use which could handle staples and clips accidentally inserted into the machine. The required reliability and durability were reached after hundreds of tests on different type of steels and cutting technologies.

In 1997 the KOBRA 240 range was launched on the market and it was the first shredder capable to shred CDs/DVDs and Floppy Disks in addition to paper with a 24 hours continuous duty motor allowing continuous shredding operations without the inconveniences of stops for overheating or duty cycle. Research and innovation led to the development of a new model suitable for centralized shredding operations where a full office waste bin can be emptied into the shredder’s hopper with rotating flaps automatically taking care of the shredding process of the material.

In 2005 Elcoman patents the exclusive “Energy Smart System” controlling the electrical consumption in stand-by mode and automatically turning the machine in power save mode in case of no use.

All new KOBRA models are equipped with an “Automatic Oiling System” and “Throw and Shred System” together with a double set of cutting knives which become standard in selected KOBRA models. 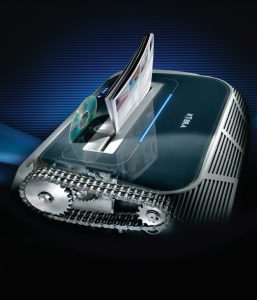 Back in 2010 a Touch Screen technology was developed to control the shredder’s functions and together with LED display to monitor the status of the machine during operations.

The Automatic Oiling System was integrated into the machines and a “Metal Detection System” was an option for High Security machines.

The latest Elcoman development is the Hybrid Technology.

The KOBRA Hybrid Power Management System utilizes the energy stored during each shredding cycle to improve efficiency and to disconnect the machine from power supply. The KOBRA Hybrid System allows up to 15% of shredding through the stored energy.

Distinction is clear in the awareness of environmental issues: focus on energy power saving, hybrid technology and easy recycling of shredded material.

This is the direction Elcoman is moving towards, always seeking for new advancing technologies and passionate about innovating and making outstanding quality products.